Archive for the category “Reflections”

A thought struck me earlier today and I haven’t been able to shake it, so I will write about it.

My spirituality has never been allowed to be about me.

The strict Baptist upbringing of my first two decades did not allow for anything that even hinted at selfishness. We weren’t Puritans by any stretch of the imagination, but we were taught that our lives weren’t about us because they belonged to God. We were born because God had a purpose for us. This purpose might include many things (pain, ridicule, sacrifices as huge as dying), but it ultimately culminated in bringing glory to himself. All that we said or did was supposed to please him and bring glory to his name and cause. How we worshipped, what we wore, and even the secret things we pondered late at night belonged to him. To do things because you wanted to was selfish and sinful. Rebellion was “as the sin of witchcraft,” (1 Samuel 15:23) after all. Most of the Christians I have known toss around the phrase, “it’s God’s will” or “the Holy Spirit is leading me to do this” or something similar to that to justify the decisions they make. I’ve seen those phrases used to justify some pretty terrible things, but that’s a topic for another time.

Fundamentalism removes the individual’s self. An individual (in the sense I’m speaking about) is comfortable in their own skin and is quite happy to find his/her own way in life. An individual is empowered and free. Individuals don’t last in fundamentalism (unless they become cult leaders or the like). Fundamentalism must break down people’s sense of self, tell them it’s evil (play on past guilt, etc.), and then insert a controlling measure (strict adherence to particular teachings, lifestyle, dress, etc.). The Bible often uses the imagery of sheep needing a shepherd to illustrate humanities’ need for the Christian God. Sheep are very stupid animals, or so I’ve been told, and will get themselves into all kinds of trouble without the guidance of a shepherd. People often act like sheep; sometimes we like being told what to do rather than having to make our own decisions and then being responsible for them (and sometimes it’s necessary, to a degree). Individuals don’t fit well in flocks of sheep, though.

I’m an individual. I’ve always struggled with fitting in with the flock or going off on my own. I have many vivid memories associated with this struggle. In childhood I tried to blindly implement the rules I was taught, but kept finding them to be silly and impractical. I fought violently against the herd as I grew older, but kept being pulled back and shepherded into conformity. I earnestly believed but struggled with who I was as an individual. I worked at packing away my individuality, thinking it to be sinful, and tried to be a good little sheep. Keeping one’s self under control was prized, so I worked and worked at that. All this packing away and control did great damage to me on so many levels.

This article sparked some questions in my mind.
1. Why is the government tasked with educating our children in the first place?

2. How can rules, laws, whatever be put into place about the style of homeschooling, given the diverse styles of learning? For people who unschool, would their children be considered truant?

I think everyone should have education available to them. It seems the only way to make that possible is through the government. I realize many children might not receive an education if there weren’t truancy rules and such… but I’m still not convinced the way things are set up now is good. People who talk online seem prone to over-generalizing the pros or cons of any one method of education. Groups like IFB, Quiverfull, or other super conservatives tend to demonize anything that isn’t homeschooling. Extremely liberal people turn around and slam anything that isn’t public school (or maybe private school). Crunchy folks seem to be largely pro-homeschool or unschooling… but perhaps more flexible instead of judgmental. Regardless, I think the lesson to walk away from all this with is this: one size doesn’t fit all.

What do you think?

On a vacation of sorts to see my family. It’s odd to be back in an old life. They’ve been very respectful of me for the most part and haven’t made attempts at proselytization. My mom suggested I pray about a few things, but that has been it so far. I’ve done my best to be respectful of their beliefs as well. I’ve also tried not to spout my more liberal thoughts and opinions. Being an adult child is a bizarre state of existence that I’m having a hard time adjusting to.
I’ve caught myself wanting to say something very pagan a few times. They don’t know my current state of beliefs, and would not appreciate my paganism. The last time my parents brought up paganism, I was unsure of my beliefs, but the topic was more than enough to send my mom into a tizzy. Because of that instance, I’m loathe to bring it up again. I censor everything I say to them or do on Facebook. Hiding things is frightfully annoying and stressful, but espousing the truth would be worse, so for now I’ll stay silent.
Do any of you have coming out stories or thoughts about the limbo state of being a twenty-something adult child?

There was once a time when I practically hated all things religious and all things spiritual. I was angry and bitter after spending the first 20 or so years of my life in fundamental Christianity. The day the blindfold came off, I began realizing the many the things I had learned, seen, been part of, and had done to me that were wrong. The lies, the imposed guilt, the many options I should have had but didn’t because of my upbringing. The many evils done in the name of my former religion that had been swept under the rug by fellow Christians. So very many things crossed my mind and fueled my anger.

As I look back, I realize my anger was one of the five steps of loss and grief. The five stages are denial and isolation, anger, bargaining, depression, and acceptance (I pulled my list and quote from this site). They don’t necessarily occur in a specific order and you can move through them several times. I’m going to list the stages in the order that I experienced them.

Before I officially renounced my faith, I went through the first stage of denial and isolation. END_OF_DOCUMENT_TOKEN_TO_BE_REPLACED 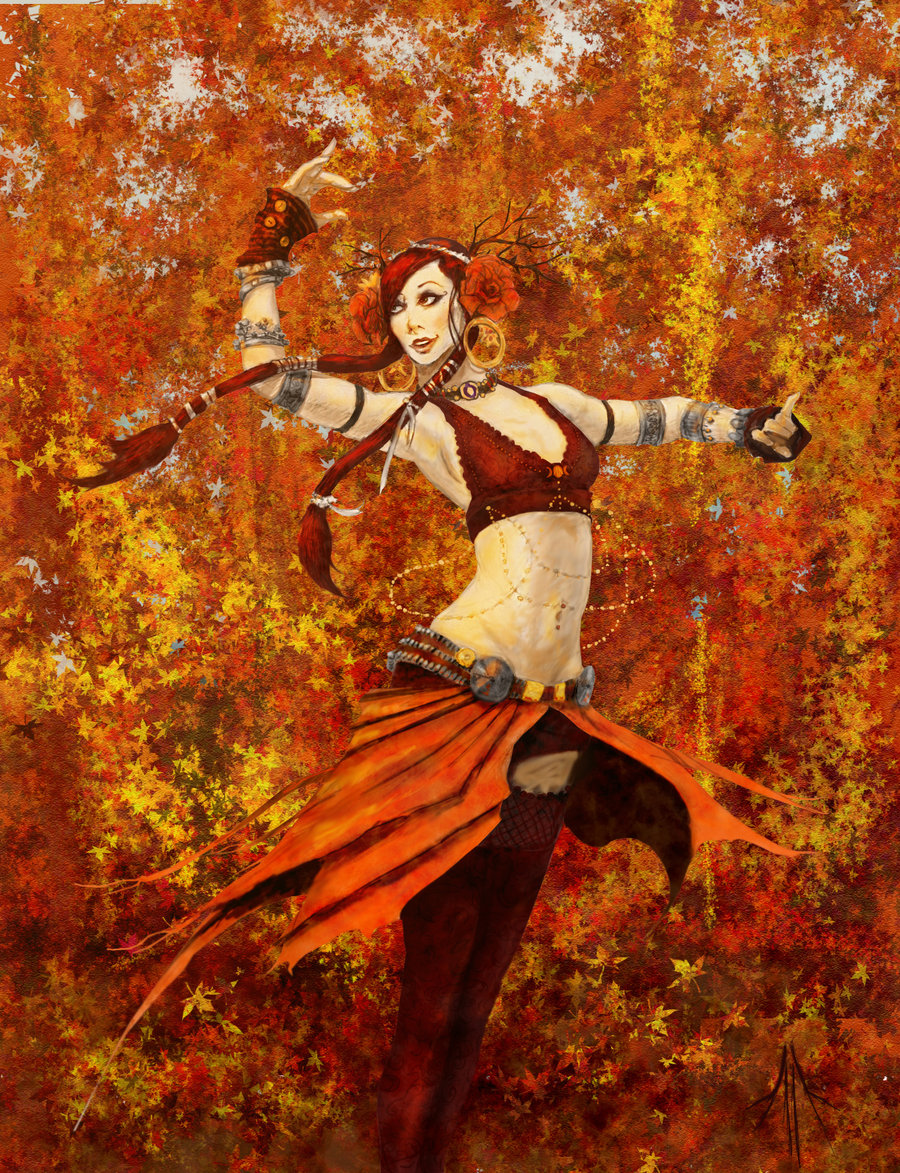 Lately I’ve been looking for a patron goddess (and perhaps a god). There are lists and lists of deities out there, but I am looking for the goddess whose name and area of influence speaks to me personally.

Here are the ones who have jumped out at me (there are a lot):

Airmid: Celtic goddess of healing, medicine, and Spring; brings the dead back to life

Arianrhod: Welsh Celtic goddess of air, reincarnation, full moons, the stars, karma, the Wheel of the Year, the web of fate, and retribution

Feeling really out of balance tonight. Probably has something to do with the food I ate at lunch today. A kind relative invited me over for an Easter dinner. The food was made with love but full of processed ingredients, which makes my body feel ill. When my body feels ill, my spirit often feels ill too. I can’t do much for my body, so I’m focusing on my spirit. Found a nice playlist of music on youtube with pagan-themed lyrics. The music is very hypnotic, probably because it’s a lot like chanting, with simple accompaniment that makes it even more peaceful. I believe I’ll light some incense too. Most incense makes my asthma go crazy, but I found some that’s very natural and it doesn’t bother me. It’s so soothing and nice smelling.

I watched a very moving documentary (I guess you would call it that) on Netflix the other day. It was called Mythic Journeys. I took some notes, so when I’m in the right frame of mind I’ll compile my thoughts together and share them with you. I highly suggest you find this documentary and watch it. It starts out a bit oddly, but once you get the feel for where it is headed and hear the various speakers, I think you’ll find it full of wisdom and very beautiful. It has rekindled my life-long love and appreciation for mythology.

Posted in Reflections, The Words of Others and tagged beliefs, humanistic, naturalistic, nature, pagan, worldview | Leave a comment

What a beautiful philosophy to live by!

Mentioned in an article I read this morning. If I can find the article again I’ll put it up for you to read.